According to Greek mythology, Naxos is the place where Zeus, the father of the 12 gods of Olympus, was raised. It is the largest and most imposing of the Cyclades, so when you visit, it is easy to understand this myth.

In Paros our boat was scheduled for 10am this morning so we arrived on time at 09:45 to be herded into gates like cattle on a farm. 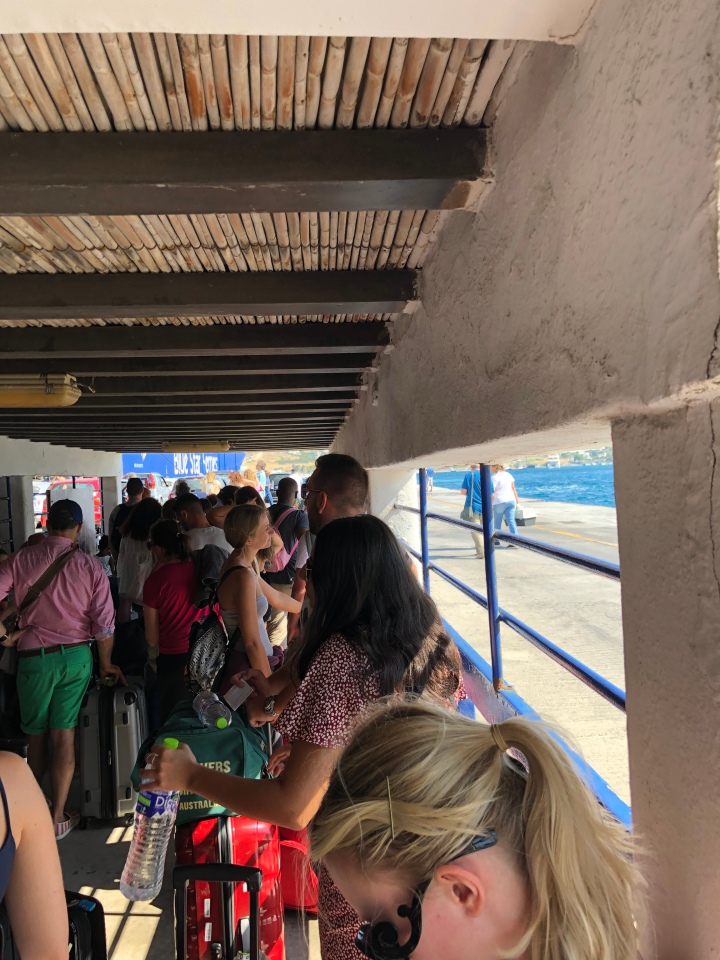 The ferry arrived at 10:35 which is technically early running on Greek time (they’re not very reliable). Our speedboat was a little smaller this time but still had all the necessary comforts as the others did.

Katy and I both felt sea sick on the journey which was strange because neither of us were sick or hungover in any way. Maybe it was the smaller sized boat? It was only a 40min boat ride so we survived with our breakfast still in our stomach and minimal fuss. As we came into Naxos port it was obvious that this place is much bigger as a town. The Chora (main town) extended as far as the eye could see along the coast and everyone is greeted by the sight of the famous Apollo’s Temple as the boat pulled in. 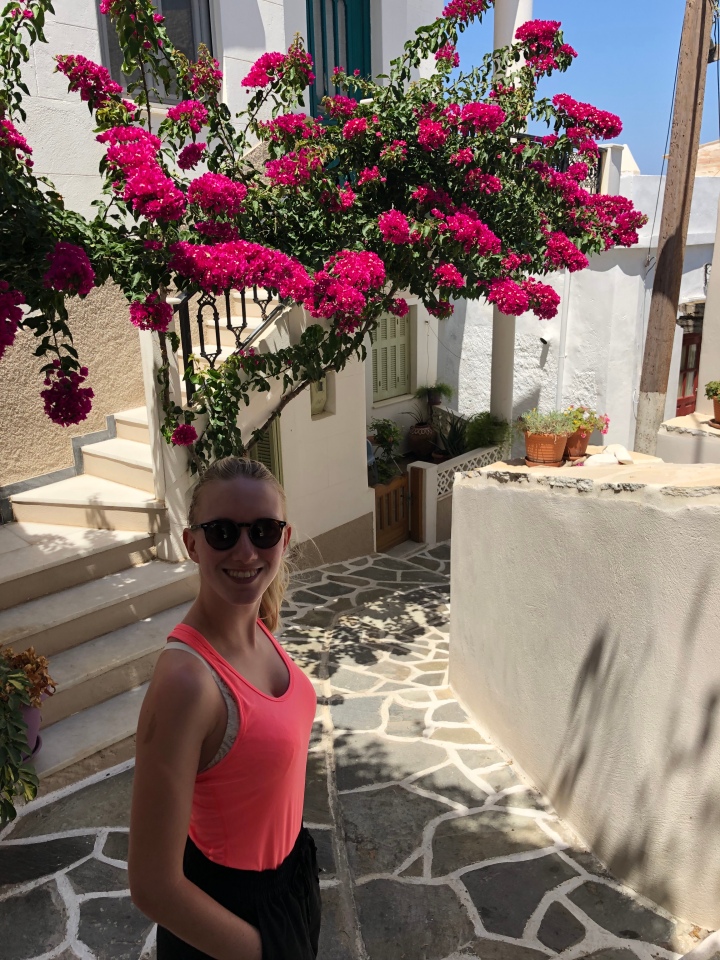 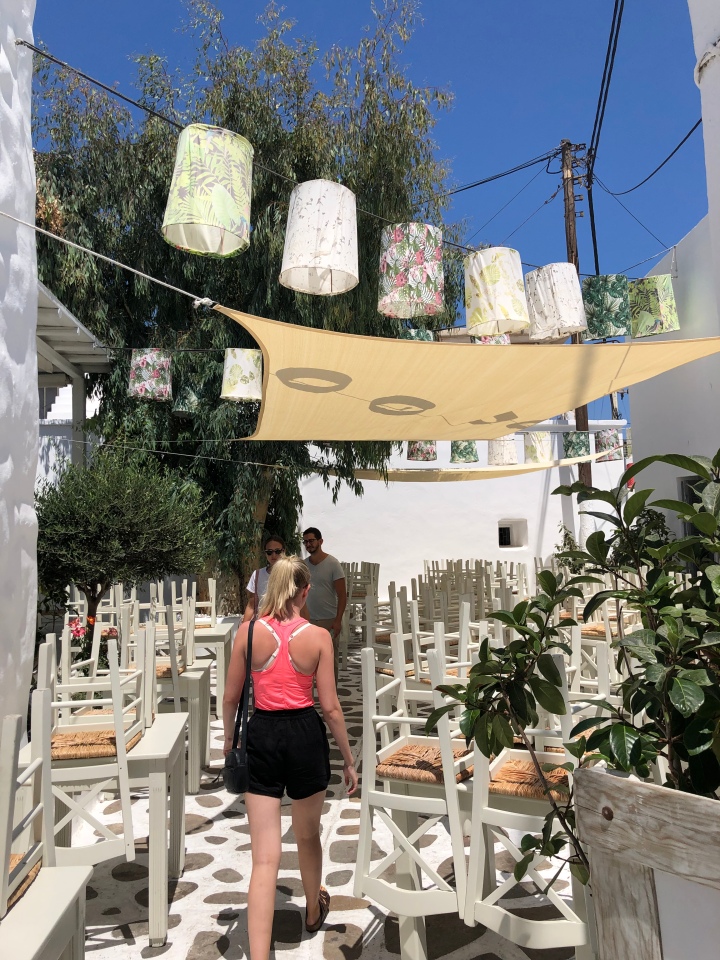 We weaved our way through the old town which is deceptively hilly and full of stairs to arrive at our accommodation. We were fully expecting our room to not be ready as we were very early. By some stroke of luck our room was ready and it was only 11:30am. We checked in and unpacked before heading into the town for a walk around and to grab a bite to eat. 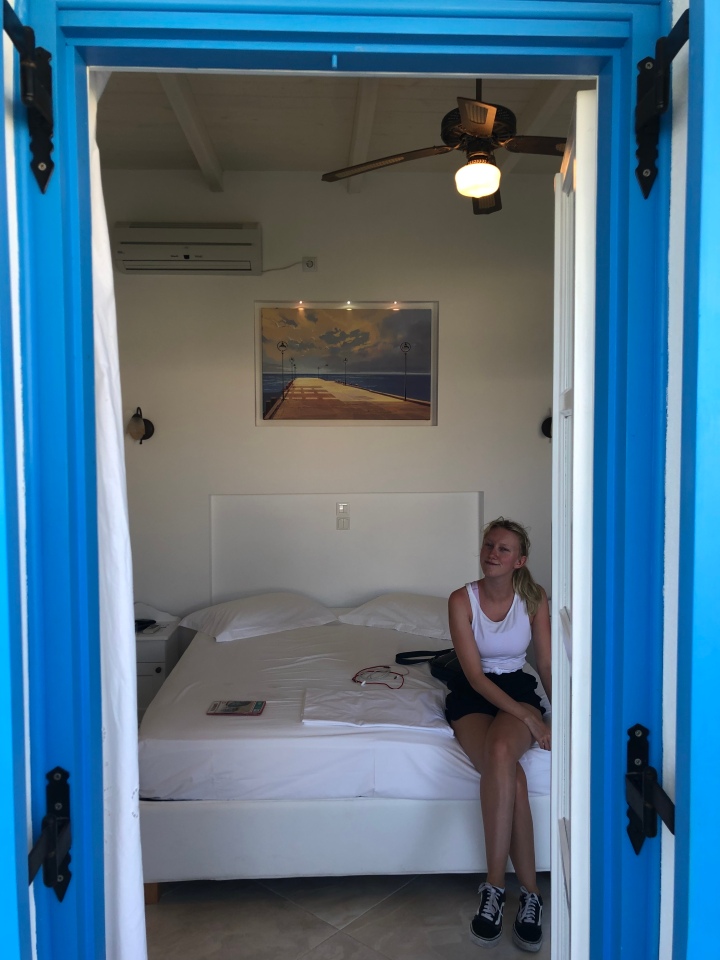 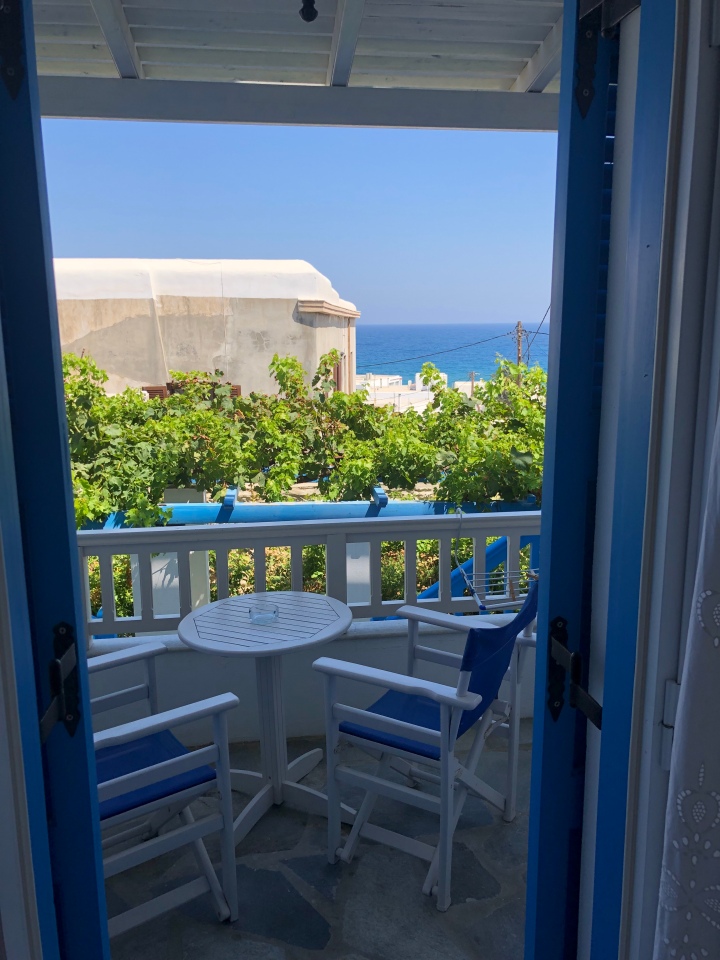 Our room is so Greek and quite modern and clean. My favourite of the rooms we have had in the Cyclades. We are staying at Hotel Anixis in the old town. The room is small, all white with a decent sized balcony of blue trimming and an ocean view which we will be utilising for breakfast tomorrow for sure.

We wove down to the waterfront and found a semi-cheap place for lunch. We had the usual salad and a club sandwich and very much enjoyed them.

I was interrupted mid meal by a very burly Greek man at the table beside us. He was smiling at me and saying words I didn’t understand. Eventually I figured out he was asking where I was from, “Innglund??” he muttered several times. To which I replied no I’m from Australia and she’s from Scotland. He gave a confused look but his 12 year old daughter explained to him my response. He then gestured that his daughter was learning English and wanted me to speak to her in English. The daughter wasn’t very forthcoming (probably due to her embarrassing father) but I asked a few questions and her English was excellent. They were from Athens and holidaying on Naxos for a week in the summer.

After lunch we set about to get Katy’s phone screen fixed which she had shattered previously. We found a place on google and went to hand it in to be repaired. €155 and 45min later her phone was as good as new, although Katy was sprouting a new sharp pain extending from the right side of her body- her wallet!!

We spent the rest of the afternoon wandering and asked around for a few prices for car/quad bike rentals for tomorrow. We bought a few things at the grocery store and wandered back to our hotel for a rest and to line up a few things for our night time.

After our rest we walked across towards the Temple of Apollo. The sun was setting and we were a little early so we ever so slowly strolled down the 10min walk to wait for the sun to descend further. The Temple of Apollo is more of a door-like ruin rather than a Temple. Apparently it was an unfinished temple originally and now all that’s left is the gate.

The “Portara” or “great door” stands proudly as the jewel of Naxos. It is believed that this temple was built in the honor of Apollo, the Greek God who protected music and poets and other things. Proof of this lies in the fact that the temple faces in the direction of Delos, an island in the near distance, which is believed to be Apollo’s birthplace. It’s worth noting also that Apollo is the son of Zeus, a commonly known Greek God, one of the 12 Olympians. Enough Greek mythology, this place was super cool and we stayed for the most spectacular sunset. Possibly only Pathos sunset could trump this one from all our Greek sunsets. 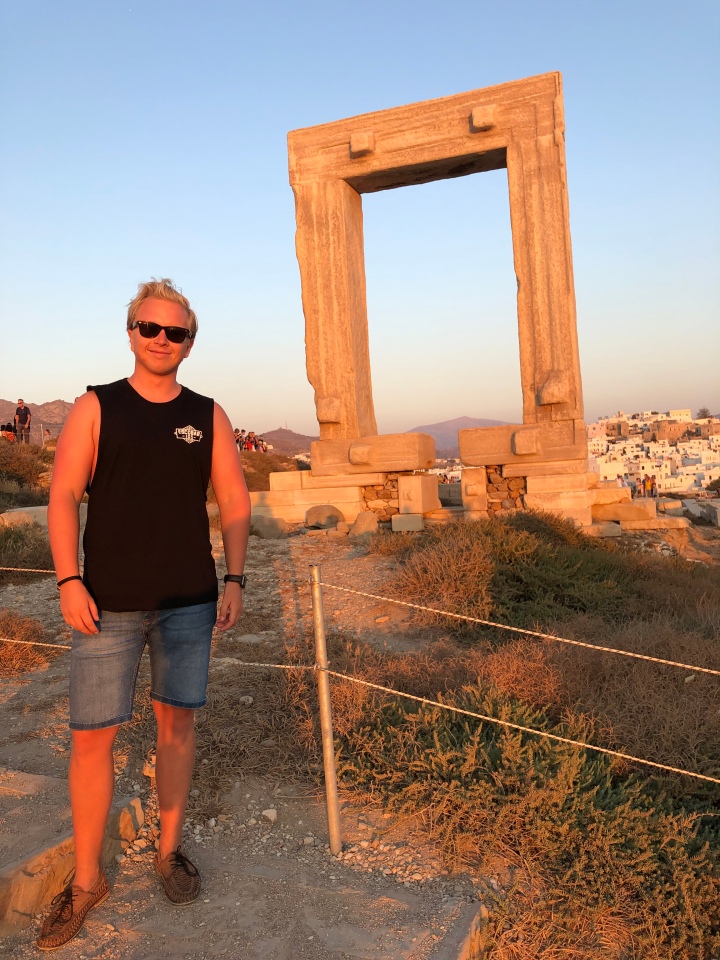 After the sun had set which took about 20min more we headed back to a decent priced restaurant we saw earlier. We sampled more traditional Greek food surrounded by a lovely garden and accompanied by many stray cats. 😂

We weren’t ready for bed so went for a cocktail on a rooftop bar overlooking the port. I did try to take photos of the view but it was a dimly lit speak-easy bar so the pictures didn’t turn out very well. We headed home after midnight and crashed in our very comfortable bed.

I hope you all still read these occasionally because this blogging does take up a lot of time. At the very worst we will have some great stories to read to ourselves or the grandkids when we are 70 😊